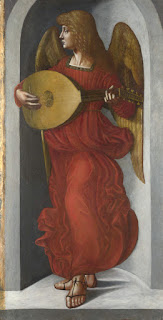 It would seem certain that the central painting for the Confraternity’s Chapel at the Church of San Francesco was almost finished at or about the time stated in the contract, December 1483, which accounts for the complaint by the painters that the central panel alone cost all the money.
When the two side panels, now in the National Gallery, London,  were provided, at date unknown, they were very much inferior to the central panel.   Any idea for four angels in each panel had entirely disappeared.  The right panel which has an angel in red playing a lute, is presumed to be by Ambrogio de Predis.  The left panel, with an angel in green playing the vielle, is by a different hand, perhaps Marco d'Oggiono, one of Leonardo's pupils.  The face of this figure is markedly Leonardesque in style and treatment.  It appears to be based directly on the head of John the Evangelist in Leonardo's Last Supper,* while the face of the angel in red bears a strong similarity to two drawings by Leonardo that are believed to represent his apprentice Salai as a youth, a drawing in red chalk in the Uffizi* and the other in black chalk in the Royal Library, Windsor, No. 12557. 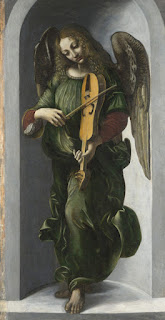 The angels are very different in style. The angle of the heads and the musical instruments are also different but, remarkably, the posture of the bodies, the position of the feet and the draperies appear to be based on the same cartoon.  The drapery of the angel in green has been taken as a model for that in red.  Although the flamboyantly curling lower edge of the green garment can be traced through its various complexities, this has been entirely lost sight of in the red garment where the form of the drapery has simply been fudged.


When the outer panels are assembled with the centrepiece, the fact that both angels are turned the same way gives a strange appearance as if both were intended to go on the right side of the central panel. One would expect that, even if a single design was used, the motif would have been reversed, as was common in early Renaissance paintings such as Piero della Francesca's Madonna del Parto.


A recent investigation and cleaning of the two panels by the National Gallery revealed that the grey niches were later additions.  A reflectogram of the painting of the angel in green revealed traces of a landscape behind the angels.  The National Gallery proposes that the angels were at a level higher than the central panel, rather than on either side of it, as is usually depicted in reconstructions of the composition. **

Next page:  11. Collaboration: the painting of the flowers